The sales executive who sold combustible cladding to the Grenfell Tower refurbishment knew that it was unsafe to use on high-rise buildings, the inquiry has heard.

French sent a link to a May 2013 BBC news article to colleagues about the string of blazes in the United Arab Emirates of buildings which had been clad in ACM.

The article described how fires in these buildings had “[spread] rapidly, racing to the top of the building and sending flaming debris hurtling to the streets below”.

French also forwarded an email from a salesperson at rival company Alucobond who wrote that ACM cladding could behave like a “chimney which transports the fire from bottom to top or vice versa within the shortest time”.

“The perils of using cheap ACM alternatives have been exposed,” the email added. 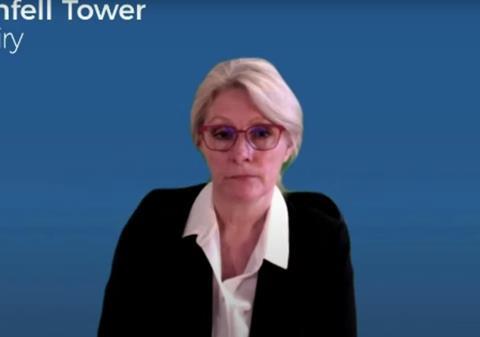 At the time of the email, French was negotiating with the project team for the Grenfell Tower refurbishment for the sale of 3,000m2 of Arconic’s combustible Reynobond PE cladding, a type of ACM.

Despite being aware of the dangers of ACM, French told the inquiry in her witness statement that, during negotiations with the Grenfell refurbishment project, “I do not recall ever thinking about the height of the building or the extent of the cladding”.

She said that this was because “as far as I was concerned at the time,” the product had a certificate from the British Board of Agrement stating that it “may be regarded” as meeting UK Class 0, meaning that it was safe for use on buildings over 18m.

Arconic had at the time been using a 2008 test report of Reynobond PE to claim that the it met the Euroclass B standard, which was used by the British Board of Agrement (BBA) as the basis for giving the product the Class 0 rating.

But in February 2014, then-technical manager Claude Wehrle sent French a test report of Reynobond PE which showed that it only achieved the Euroclass E rating.

Wehrle wrote: “The previous ‘B’ class reported done for Reynobond PE in riveted system can no more be used from now.”

Despite Wehrle’s email, the inquiry heard that French did not inform customers about the changed rating, instead sending the original BBA certificate to buyers, including the Grenfell Tower team.

French said in her witness statement that she did not recall ever being specifically asked to send or highlight the new report to customers.

Counsel to the inquiry Richard Millett QC asked: “Was it not reasonably clear to you at the time when you received this information from Mr Wehrle that it was being sent to you for you to do something with?”

French replied: “At the time, no. I didn’t think it was relevant to the UK.”

Millett asked: ”Did you simply take it on yourself to ignore it without seeking any advice or instruction or guidance or help from those senior to you at Arconic?”

French replied: “Yeah, I don’t recall what I - what action I took at the time.”

Millet then asked: “Well, on the look of it, you just sat on it; is that right?” to which French replied: ”Yeah, I don’t recall what action I did or didn’t take with it.”

French replied: “I honestly can’t recall having made those - pulling that information together in the way that you’re explaining it.”

Reynobond PE was the most popular of Arconic’s cladding products in the UK at the time, with the inquiry hearing yesterday that it was sold “by default” over a slightly more costly fire retardant version known as Reynobond FR.

French told Tuesday’s hearing how she “cannot remember a single occasion on which I sold FR” in the UK, despite the fire retardant product being “much more” popular in Germany.

Phase one of the inquiry into the 2017 disaster that killed 72 people in 2017 found that the cladding installed on Grenfell Tower was the “primary cause” of the spread of the fire.