City of gingerbread opens to public

Initiative organised by Museum of Architecture

Architects, engineers and designers have created an annual Gingerbread City – opened to the public this weekend – which this year explores the importance of green space in cities.

Madeleine Kessler Architecture and Tibbalds Planning and Urban Design developed the masterplan for the city, made entirely of gingerbread and confectionary.

With more than 100 individual gingerbread structures, the builders created a heavily populated centre, riverbanks, a green belt as well as a town hall, stadium and schools. The edible development was opened in Belgravia, London, on Saturday and is organised by the Museum of Architecture every year to help support it as a charity. 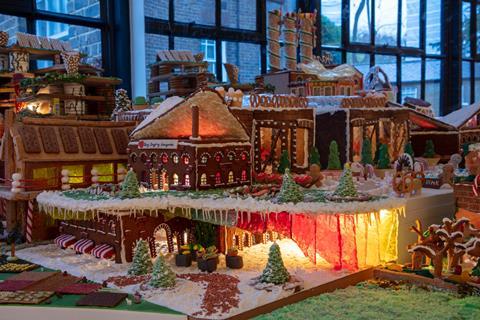 Melissa Woolford, founder and director of the Museum of Architecture, said: “We are so pleased to bring The Gingerbread City to life again this year and showcase such a brilliant range of innovative and sustainable design ideas.

“It is so exciting to see such creativity from those working in the built environment. I am sure our visitors will go home feeling really inspired by how introducing more nature into cities can make them happier and healthier places to live and work.”

It has four different model trains contributed by model railway brand Hornby, including the Santa’s Express.

See below for a list of highlights and which companies created them.

The Ho Ho Highline by vPPR

The Field Beneath community green space by Smart Rewilding

Battenberg Boathouse by The Manser Practice