Atkins drafted in to draw up expanded Oxford station revamp

It replaces a 2014 masterplan by AHR 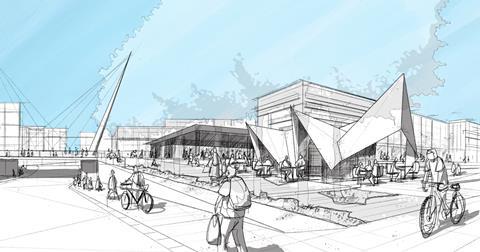 A concept illustration for the station revamp

Atkins has been appointed to lead the development of an upgraded masterplan for Oxford railway station and the surrounding area.

The new vision will replace a former £75m masterplan for the station which was unveiled by AHR in 2014.

Since then new rail lines linking Oxford to surrounding areas and a proposal by Oxford university to create an innovation quarter in the city have been approved meaning AHR’s original masterplan needed an update.

It is planning for the addition of two new railway lines to the station - the East West Rail line connecting Oxford with Cambridge via Milton Keynes, and the reopened Cowley branch line connecting eastern areas of the city to the city centre.

The phased masterplan will see improved public spaces, cycling facilities and bus and taxi interchanges built at the station. It will also scope out potential development opportunities in the station’s immediate vicinity.

It is one element of wider plans to transform west Oxford by creating an innovation district at Osney Mead industrial estate with office space, research and development space, leisure facilities and hundreds of new homes.

Oxfordshire’s Local Industrial Strategy, which will set out details for the district, is due to be published soon.

The first round of public consultations on the masterplan is due to kick off in late 2020.