Architects march on Arb to ask for protection for climate protestors 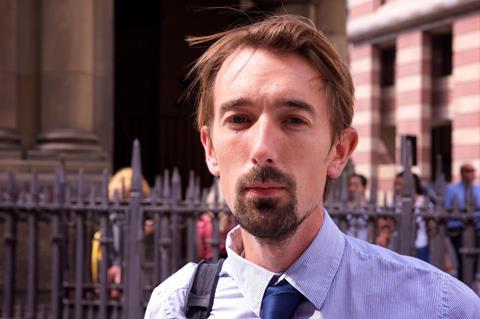 An architect who ended up with a criminal record after taking part in an Extinction Rebellion protest is to lead a rally to the Arb’s headquarters tomorrow.

Tom Bennett of Studio Bark will deliver a letter asking the Architects Registration Board to protect professionals who face legal proceedings because of their personal beliefs.

The newly formed Architects Climate Action Network (ACAN) will support him when he hands over the letter at Weymouth Street in central London tomorrow lunchtime.

Bennett said he is less concerned by his own case than by the wider issues it raised.

The 33-year-old was convicted last month of breaching section 14 of the Public Order Act by refusing to comply with a police request for him to move from the XR camp on Waterloo Bridge in April. He was lying in the road when he was arrested.

City of London magistrates gave him a conditional discharge and ordered to pay £640 in court fees. He is now taking legal advice about a possible appeal.

Bennett said he knew of architects who wanted to join the Extinction Rebellion protests but were worried about its possible impact on their careers if they were arrested.

The Arb’s code of conduct states: “If you find yourself in a position where you know that you have fallen short of these standards, or that your conduct could reflect badly on the profession, you are expected to report the matter to Arb. You should notify the registrar within 28 days if, for example, you are convicted of a criminal offence.”

That is one of the purposes of Bennett’s visit tomorrow. He said the Arb could open a disciplinary case but that it was down to the discretion of the registrar whether action was pursued. Erasure from the official register of architects is a possible sanction.

“There have been moments of anxiety, when I’ve thought, ‘What have I done? Will I be struck off?’,” Bennett told Building Design.

The code adds: “A disciplinary order may be made against you if you are convicted of a criminal offence other than where that offence has no material relevance to your fitness to practise as an architect.”

Bennett said he would ask Arb for a meeting to discuss distinguishing between matters of conscience and other criminal cases.

He said: “Many architects and professionals recognise the value of our agency as citizens and agree with the necessity of civil disobedience, in the face of government inaction on the climate and ecological emergency.

“At the same time we have professional codes which may serve as a deterrent or obstacle to engaging in such activism.

“This is about highlighting the issue for wider discussion within the profession and with regulatory bodies.”

He said he was “heartened” by the support he had received from others in the profession.

ACAN issued a statement saying: “We urge architects, students and anyone concerned about the future of the construction industry to join us in supporting Tom as he faces potential disciplinary action for peaceful protest.

“We consider that Tom has acted with conscientiousness, honesty and integrity. Through non-violent demonstration he has upheld, at personal cost, the reputation of architects generally. The profession should take pride in his actions.”

The letter ACAN will deliver to Arb registrar Karen Holmes, alongside Bennett’s own letter about his conviction, reads: “In the face of the current climate emergency, architects, with their professional duty to protect the public interest, must act ‘to conserve and enhance the quality of the environment and its natural resources’. The IPCC report says that “rapid, far-reaching and unprecedented changes in all aspects of society” are required to tackle the environmental crisis.

“The undersigned therefore wish to make public their support for the actions of the registered architect Tom Bennett who was arrested on Waterloo Bridge in April 2019 while peacefully protesting in support of climate action and subsequently convicted of breaching section 14 of the Public Order Act 1986.

“In so doing, we consider that Tom Bennett has acted with conscientiousness, honesty and integrity. Through non-violent demonstration he has upheld, at personal cost, the reputation of architects generally. We call on the Arb to ensure that The Architects Code: Standards of Professional Conduct and Practice is not a barrier to activism and action.”

Architects who want to join Bennett and ACAN should meet outside the Arb’s offices shortly before 1pm tomorrow.