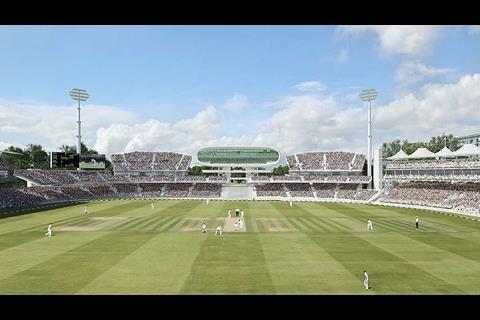 The new Compton and Edrich Stands, as seen from the Pavilion, under the Populous Lord's masterplan 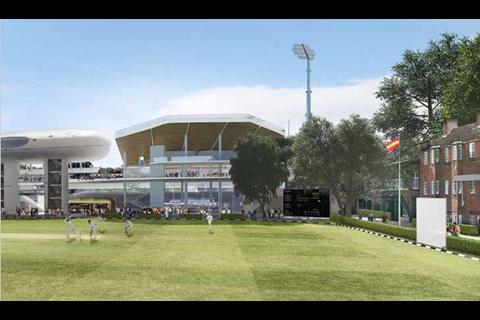 Rear of the Compton and Edrich stands (Populous Lord's masterplan). 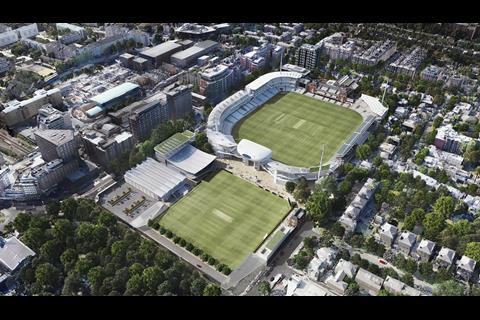 Aerial of the whole site, as envisaged by the Populous Lord's masterplan. 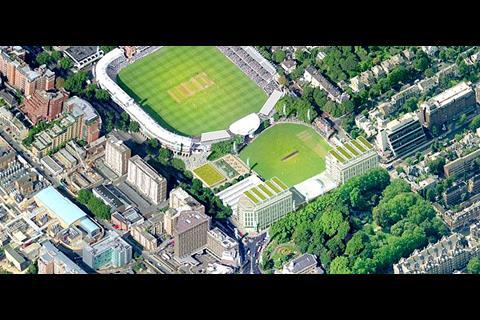 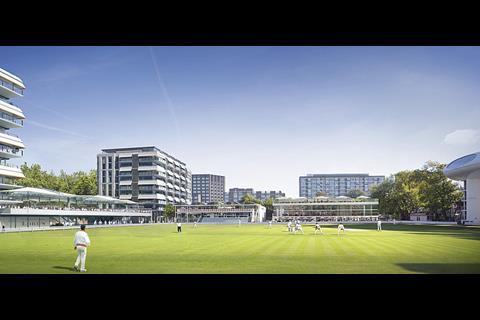 View of the Nursery Ground, under David Morley's Lord's plan, with the apartments to the left. 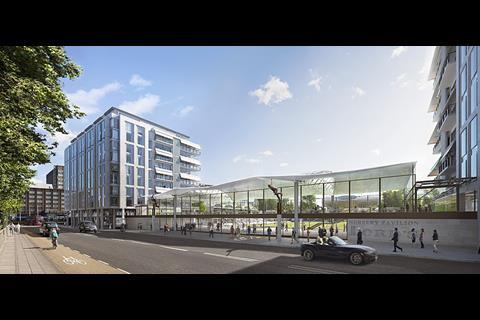 View of the Wellington Road entrance to Lord's, under the David Morley plan.

A scheme by Populous to redevelop part of Lord’s cricket ground has received the backing of Marylebone Cricket Club (MCC) members who rejected a rival proposal from David Morley Architects.

At a meeting this week, the MCC committee said the club’s 18,000 members had voted by more than 10 to one in favour of adopting the £80m Populous masterplan for the St John’s Wood ground, which will be funded from its own reserves.

This effectively rules out building residential flats at the Nursery End, as proposed by David Morley, which would have netted Lord’s a cash windfall of £135m from develper Rifkind Associates (RA).

MCC members will be asked to give their formal approval at a special general meeting on September 27.

If they do, it will end a two-year review process which has cost the famous cricket club £500,000.

The two rival proposals emerged because the MCC does not own all the land within the boundaries of Lord’s. In 1999, RA acquired two disused rail tunnels beneath a 38m-wide strip of land on the ground’s Wellington Road edge, from the then Railtrack. This left the MCC only owning the top 18 inches of the land, and as a result, any development of this side of the site would only be able to proceed with agreement of both the club and RA.

RA and David Morley then put forward a proposal for the construction of two 10-storey residential blocks, with 97 flats in total, on the Wellington Road side of the site.

But members felt the apartments could harm the “unique atmosphere and the look and feel” of Lord’s. Instead, they supported continuing with the Populous masterplan, created in 2013 and updated two years later, which proposes moving the Nursery Ground closer to Wellington Road.

The first stage of the masterplan was completed earlier this year, with the opening of the new £25m Warner Stand. The next ground development will be the replacement of the Compton and Edrich Stands at the Nursery End, with work set to begin in late 2019, boosting capacity by 2,000.

The Populous masterplan will also provide improved spectators’ facilities and circulation around the ground, with more back-of-house services under the stands. MCC members will be asked to approve each component part of the masterplan, once planning permission has been granted by Westminster city council.

MCC chairman Gerald Corbett said: “The decision by the MCC Committee provides clarity on the extremely important and often controversial subject of ground development. Put simply, the club can afford to develop the ground using its own resources and it will do so in the coming years without the need for enabling residential development.

“The Morley scheme, with flats at its heart, was considered by the committee to detract from the ambience and special feel of Lord’s, as well containing a number of operational, security, execution and planning risks. Moreover the club’s advisers were unable to recommend the proposed commercial terms.

“Although the Morley scheme offers a potential cash windfall, and the opportunity to acquire the leasehold land, the committee considered the flats and the effect on the grounds character too big a price to pay and risk to take.”

Timeline of the MCC masterplan