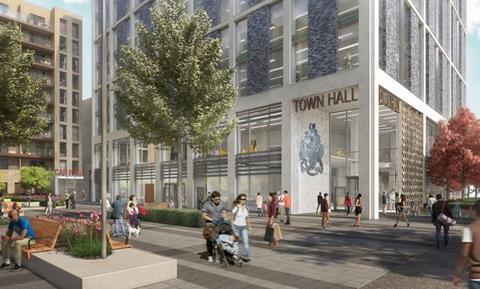 Phase two of Cartwright Pickard’s £150m regeneration scheme in Crawley has been given the green light.

As part of the development’s second phase, which is being brought forward by developer Westrock, outline permission has also been given for up to 182 new homes and a district energy centre.

The new nine-storey Crawley Town Hall will provide more than 4,000sq m of public and office space, including a new civic chamber for Crawley council, with five floors of flexible commercial office space above.

A mixed-use building will sit to the west and north sides of the public square with commercial space on the ground floor in addition to the new housing.

Construction on this phase is due to start in 2019.

The project is part of the masterplan, which will transform the town centre and allow the council to generate new revenue from commercial office tenants.

In 2017, Westrock secured planning consent for the first residential building of 91 units and will start construction in the autumn.

A contractor is expected to be appointed later in the summer.