Transport for London has appointed consultant Arcadis to develop the design and costings for the Rotherhithe Bridge, a planned Thames crossing between Canada Water and the Isle of Dogs.

The bridge was conceived by reForm Architects and engineers Elliott Wood, who identified a site for the bridge and drew up a design proposal, along with costings and demand modelling. However, there is no certainty that Arcadis will make use of this design.

It will be the first central London river crossing built overground east of Tower Bridge, and the decision comes as the charity promoting the Thomas Heatherwick-designed Garden Bridge announced it was formally scrapping the project.

In relation to the Rotherhithe Bridge, Mayor of London Sadiq Khan told the Greater London Assembly that a TfL project team had been established and “progressed at pace” options for the scheme over the past year.

Arcadis had been appointed to develop the design, ensure the scheme is cost effective, and decide what type of bridge structure would be used, he said. A spokeswoman for Arcadis said the consultant was “working with TfL to develop options”.

The Rotherhithe scheme has an estimated price tag of £100m. Khan said he was aware of “an existing design which is a number of years old”, and that “there may now be innovations which are quicker, cheaper and higher quality”.

The idea for the crossing was originally conceived in 2006 by cycling charity Sustrans, who identified a site for the bridge, and ran a feasability study and demand analysis two years later. 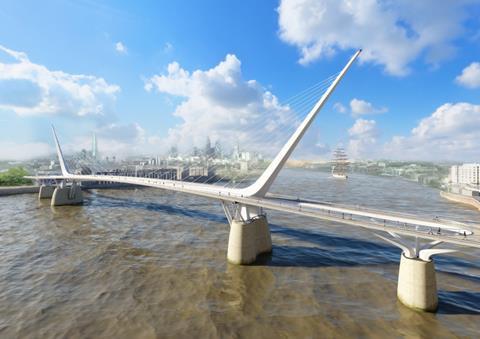 Nik Randall, managing director of reForm Architects, said it had assembled a world class team and could begin the process of delivery immediately. He said, “If our design is adopted by TfL, it will shorten the programme and greatly reduce the risk of the project stalling.”

Khan said procurement of a design and build construction partner will start this autumn with a consultation on the preferred option made in early 2018, followed by the planning application, with final completion projected for 2020 or 2021.

The TfL business plan has funding to support the new crossing, Khan said, but said he wanted “third parties to contribute” as well.

The mayor estimated that the bridge would not open until 2020 or 2021, but added that “if a bidder can do it sooner, their application may be considered more favourably”.

Khan said he would make sure recommendations and lessons from previous procurements, including Dame Margaret Hodge’s report on the Garden Bridge, were followed.