This is the fifth in our regular series of CPD modules, designed to help you broaden your knowledge while you work. This module is sponsored by Baxi

How to use this module: BD Reviews’ free continuing professional development distance learning programme is open to everyone who wants to develop and improve their professional knowledge and skills. These modules can contribute to your annual programme of CPD activity to help you maintain membership of professional institutions and bodies. All you have to do is read this module then take the questions via the link below or at the bottom of the page.

Domestic energy consumption has been increasing steadily since the 1970s, largely due to the proliferation of installed central heating and an increasing number of electrical appliances. According to the Department for Environment, Food & Rural Affairs, space and water heating is responsible for 73% of UK domestic carbon dioxide emissions, compared to just 16% from domestic appliances, 6% from lighting and 5% from cooking.

There has been increased interest in micro combined heating and power (CHP) technology because of its potential for carbon savings for government and end users, financial savings for the end user and for liberating them from energy networks. The major gains from a government perspective are a more efficient use of diminishing natural resources and an improved security of supply.

Decentralised heat and power can result in greater overall efficiency at the point of use. Micro CHP is often categorised as decentralised generation, as opposed to centralised generation of power from power stations. On average, centralised power production is only 40% efficient, with 60% of energy lost from the process of burning coal. A further 5-10% is lost in transmission along power lines. This means that from 100% of fuel supplied into a central power plant, on average only 30% is provided as power to domestic dwellings. In comparison, a micro CHP unit converts more than 90% of the fuel provided into heat and power for the dwelling.

Combined heating and power (CHP) is the simultaneous production of heat and power at the point of use, and may be subdivided as large-scale, small-scale and micro CHP dependent on the electrical output. Micro CHP, according to EU definitions, refers to units that generate less than 50kWh of electricity. But the term has become synonymous with smaller applications with less than 5kWh of electrical output. For domestic installations, units typically generate 1kWh of electrical output, in line with the basic load requirements. Figure 1 shows the operation of a micro CHP unit in a dwelling with 100% of the fuel – typically natural gas – supplied to the unit. A certain proportion of this energy input is used to provide heat, while another amount is used to provide power. The percentage used for electrical output depends on which micro CHP technology is used. 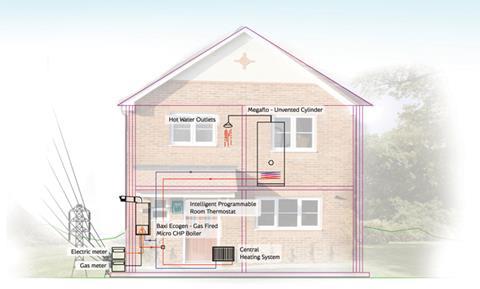 Internal combustion engines (ICE) are suitable for micro CHP applications because the technology is well-established and they are available in a range of sizes, from small portable gasoline engines to large 50,000 horsepower diesel engines. The combustion engine is powered by the expansion of the hot combustion products or fuel directly acting within the engine. To function, they require air, fuel, compression and, for spark ignition, a combustion source.

The next technology which will shortly be commercially available is the free piston Stirling engine (FPSE), a heat engine invented in 1816 by Robert Stirling, a Scottish clergyman. It uses an external heat source, which can be anything from a fossil-based product to solar energy to the heat produced by decaying plants, to create motion from a temperature difference.

Fuel cells are electrochemical devices which generate electricity through a chemical reaction. There are a variety of different fuel cell types, including Polymer Electrolytic Membrane (PEM) and Solid Oxide Fuel Cells (SOFC). Typically, the reactant gases used are hydrogen and oxygen. The majority of micro CHP devices use either natural gas from which hydrogen is extracted, or air from which oxygen is extracted.

An example of an internal combustion micro CHP system is the Baxi Dachs unit. It offers a good heat-to-power ratio, with 12.5kWh thermal and 5.5kWh electrical output, which means that it operates for a large number of hours throughout the year. Some of the advantages of the technology are that:

There are a variety of different Stirling engines available, from free piston to “wobble yoke” designs, but all work on the same basic principle, with a hermetically sealed cylinder which contains a moving piston and a fixed amount of pressurised inert gas, such as helium. No combustion takes place inside the cylinders of the engine. The operation of a Stirling engine is based on two properties of gases, under Boyle’s Law:

The free piston Stirling engine tends to start generating electricity more quickly and reaches 1kWh output faster than the wobble yoke design. Free piston Stirling engines use a displacer piston to move the enclosed gas back and forth between hot and cold reservoirs. The gas expands at the hot reservoir, moving the displacer and power piston, while at the same time forcing the gas to move to the cold reservoir. At the cold reservoir, the gas contracts and a planar spring causes the piston to move up and down. The piston is made of a magnetic material which moves up and down between generator coils, producing AC electricity at 50Hz.

The wobble yoke design is based on a kinematic Stirling engine, with four pistons at 90 degree phasing to each other. The nature of the design requires piston sealing rings and has more moving parts than the free piston design. Therefore, this type of engine would have a greater risk of failure within a desired product lifetime of 15 years. It has a large inertia, so it takes longer from the initial heat demand to start generating electricity - typically around five minutes, compared with less than two for the FPSE. It also takes longer to get up to generating 1kWh of electricity – around 80 minutes, compared to fewer than eight minutes for a FPSE, and it tends to draw a lot of energy at start-up and shutdown. All these factors limit the financial and carbon savings available with this kind of unit. There is also the consideration that due to the intricate design of the aluminium gas-to-water heat exchanger, it is important to provide a secure primary circuit protected by a suitable inhibitor.

There are a variety of manufacturers engaged in developing Stirling engine technology for micro CHP applications, including Baxi, Whispertec and Disenco. The majority of developments are geared around 1kWh electrical units to domestic applications. One typical example is the Baxi ECOGEN unit, a 24kWh heat-only boiler which can modulate in line with the heat demand from a dwelling from a minimum of 3.5kWh up to 24kWh. The output is delivered in part from the Stirling engine, which provides 6kWh thermal output, and in part from a supplementary heat exchanger, which delivers an additional 18kWh.

A number of free piston Stirling engine units were installed on field trials throughout 2007 and 2008, from which we can derive information about the potential operation of micro CHP in the real world. One example in the UK, which replaced a Band G appliance, generated 1205kWh of electricity over 23-week period, accounting for around 60% of the total electrical requirement in the dwelling. Typically, the units export a certain amount of electricity back to the grid. This could be in the region of 20-30% of the total amount generated, due to the fact that domestic dwellings do not always require the full 1kWh generated. However, in this particular example, the amount exported was higher than average – 615kWh was exported to the grid. Only 855kWh of the total demand of 2060kWh was purchased during the trial period.

It is possible to meet a requirement for 6kW of heat and 1kW of electricity in two different ways (see Figure 2).

The standard process of using a gas condensing boiler for heat and drawing electricity from the grid would cost around 34.1p. Alternatively, a micro CHP device based on the free piston Stirling engine meeting both requirements would cost around 24.9p. The total savings for heat and electrical energy generated by the micro CHP device would be around 9p.

Of the micro CHP technologies available and under development, fuel cells offer the highest electrical efficiencies – typically greater than 30% and potentially as high as 50%. This allows these units to achieve very good electrical output and maximise financial savings.

The units have a heat-to-power ratio of around 2:1, which allows them to generate a good amount of electrical output for a relatively low thermal dissipation. The units can modulate on the complete thermal load and on the fuel cell stack itself, while still generating electrical out-put, maximising electrical generation. Running hours are long, and can typically be in the region of 6000 hours, which offers excellent carbon emissions savings. The low operating temper-atures of PEM fuel cells (between 80-100°C) mean they are very fast to start-up. A number of manufacturers are working on PEM fuel cell technology, and units are undergoing extensive field trials within the UK and Europe, with commercial availability scheduled for 2012/2013.

This module is sponsored by Baxi.

For further information, go to: www.baxi.co.uk