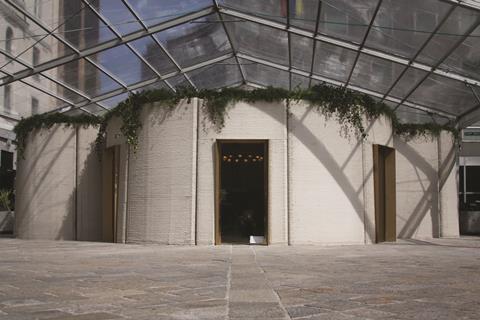 Over the past few years the race to build the world’s first 3D-printed house has morphed from specialist sci-fi sideshow into one of the most compelling technological contests within the mainstream building industry. First off the blocks was Shanghai-based engineering company WinSun with its 3D-printed villa and flats in China’s Jiangsu Province in 2015. The five-storey, 1,100m² main building claimed to be the first 3D-printed block of flats in the world.

Next came the world’s first 3D-printed office in Dubai in 2016, again designed by WinSun in a collaboration with Gensler UK engineers Thornton Tomasetti and opened by none less than the prime minister of the United Arab Emirates. The single-storey 250m² structure was built in only 17 days and required a team of just seven installers and 10 specialist electricians to put together.

Debuting last month at Milan’s design festival Salone del Mobile, the one-storey, 100m² showcase prototype has been built in a prestigious location in the piazza right in front of Milan’s famous cathedral and was unveiled by the city’s mayor.

Designed by Arup and Milanese architecture practice CLS Architetti, it embraces many of the same technological advances of its predecessors: it can be dismantled and relocated, takes just 48 hours to build and therefore represents significant cost and programme savings when compared with the construction of traditional housing.