The brief called for sports and arts facilities, teaching space and research accommodation – it was a lot to fit in but inspired a highly innovative response, Thomas Lane finds 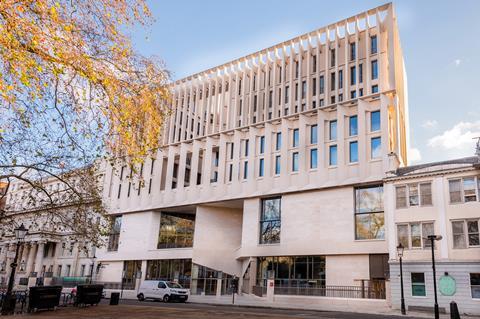 The Marshall building features a formal front facade as it faces onto the large open space of Lincoln’s Inn Fields and is built from Portland stone and matching precast concrete to blend in with neighbouring buildings.

For a rollcall of some of the world’s best architects, look no further than those on a shortlist for a London School of Economics and Political Science project. The LSE has a strong reputation as an enlightened client willing to invest in high-quality architecture and to take risks by sometimes engaging smaller, less well-known practices that go on to join that list.

The LSE has been busily upgrading its estate from a rundown, random collection of buildings dotted around the streets off Kingsway in central London to fulfil its aspiration to create a new university quarter with buildings reflecting its status as a world-class academic institution.

It has gradually created an amazing collection of buildings which started with the radical reworking of an Edwardian office by Grimshaw back in 2008. The Saw Swee Hock student centre completed six years later and is a dramatic exercise in interlocking triangular and rectangular shapes softened by beautifully crafted red brick anchoring it back to more prosaic neighbours. Designed by Dublin-based practice O’Donnell+Tuomey, the building was shortlisted for the Stirling Prize in 2014 with O’Donnell+Tuomey going on to win the Gold Medal in 2015.

The Rogers Stirk Harbour + Partners-designed Centre Building completed in 2019 and is very different: typically RSHP with expressed structural elements and splashes of vivid colour; the 13-storey rectangular block is animated by a huge staircase clearly expressed through the glazing and enlivened by stepped red soffits. It has proved hugely popular with students as a socialising and work hub.

And now there is the latest addition to the collection, the Marshall Building, designed by another Dublin-based practice, Grafton, recipient of the 2020 RIBA Gold Medal. Grafton received the highest architectural honour, the Pritzker Prize, last year and most recently won the Stirling Prize for another academic building, the Townhouse at Kingston University.