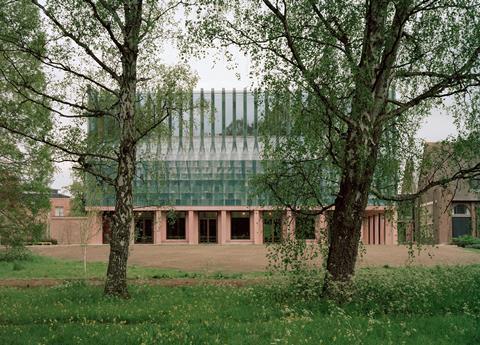 The base structure is of pink-hued concrete, but the green faience upper section dominates the look of the building, in a more audacious approach than Feilden Fowles usually takes

When Homerton College, part of the University of Cambridge, launched a competition in 2016 for a new dining hall, many would have favoured the chances of the better-known names on a shortlist that included Caruso St John and dRMM. Instead, the college appointed the less established Feilden Fowles, an opportunity that practice Director Ed Fowles happily acknowledges was “a gift of a project”.

Professor Geoff Ward, who oversaw the £10.4m building’s procurement and retired as Homerton’s principal in September 2021, describes how the selection panel was won over by  Feilden Fowles’ strong commitment to collaboration. “The sense with some of the other shortlisted practices was that there was less openness to an evolving conversation,” says Ward, “whereas with Feilden Fowles they were clearly going to be good to work with – not divas”.

The key driver behind the project was a perceived need for a new dining hall and catering facilities, even though the college already had its existing 19th-century Great Hall. This raises the question of why improved kitchens and circulation could not be incorporated within the existing buildings, especially given that sustainability was ostensibly a key objective.