Take charge of your practice’s data 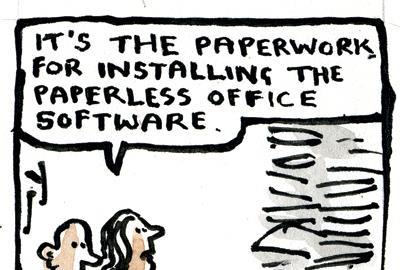 It pays to research the options for document management

Choosing the right document management software for your practice can help with quality management and stop important information getting lost in email in-boxes. But with an ever-expanding array of programs being pitched to the architecture community, making a choice can be a challenge.

No two systems provide the same degree of data control. Some offer practice management, covering everything from staff lists, project drawings and revisions, and all written communication to and from the practice. Others simply manage project folders, emails and contacts.

Archetype, developed for a Scottish practice by one if its staff, caters for the practice management end. Launched in 2001, it is now used by almost 300 practices and local authorities across the UK. The system uses database modules to store centrally contacts, drawings and revisions, correspondence, document templates, costings, and other data. This information is created on a project-by-project basis, with every new project being entered into a register.

Ashley Wyatt, director of Building Design & Management, has been using the system for six years and is one of Archetype’s biggest fans. He stumbled across the program by accident when he was looking for a solution to the company’s growing email management problem.

“I’ve never found anything that has the scope that this programme does. I’d prefer it to be a bit more zippy in terms of its appearance but the technical support we are given is very good,” he says. “We wouldn’t wish to run our business without using it.”

But not all Archetype users are as pleased. A local authority architect in Scotland describes the program as dated and flawed, while others have complained of poor customer support. Archetype Distribution, the main distributor in the UK, says it is improving customer support while its developer, Alec James, has just launched an update and says the system is now performing better than ever.

Geraghty Taylor Architects abandoned Archetype after just over a year in favour of a newer product. “The poor customer support contributed majorly to our decision to abandon the software,” says director Brendan Geraghty. “The function and service it is trying to deliver is very good and well considered, but the presentation was poor and it was often slow.”

“We knew what we wanted, because Archetype did do some stuff very well, but we also knew what we didn’t want. Many other packages had better features and in some ways were better than Union Square’s, but they didn’t do everything we needed,” says Geraghty.

“It’s customised to our needs as much as it can be. Union Square is open to ideas and very willing to help. It’s not cheap, though.”

Workspace is used by a number of other high-profile practices including Ian Simpson Architects, Grimshaw Architects and Rolfe Judd, which are all happy with the service it delivers.

Other practices have opted for systems that are used by a fewer number of practices but which offer unique features or have been developed to suit a specific practice’s methods.

HOK Sport’s London office is about to install a US product, Newforma, that has been tried and tested by both HOK and HOK Sport’s offices in the US.

“It’s quite a young product but it does some pretty amazing things,” says Pete Whitcomb, HOK Sport’s IT manager. “The great thing about it above other document management systems is that it doesn’t touch our data, it simply indexes it. Some document management systems suck all your data into a database which makes it very difficult to revert from whatever system you’ve taken.”

PlanChest is another less pervasive option. Developed by CZWG’s IT systems manager Stephen Solt, it tracks documents instead of storing them in a central system. Word-of-mouth promotion has led to it being used in 16 practices including CZWG, Make and Sheppard Robson.

“The absolute key to all of these systems is to be prepared to commit to recording this information in a structured manner, and to have somebody responsible for ensuring that this happens. But, says Solt, “there’s never a straight answer.”

Buying any of the systems mentioned involves a significant investment of around £10,000 and beyond, so making the wrong choice can be costly. Before commiting, Solt recommends looking at the total information management needs in your organisation and then having someone such as an office manager “take the task to their heart and commit quite a lot of effort to making sure that it’s done the right way”.