£190m MK Gateway plans set to be submitted next year 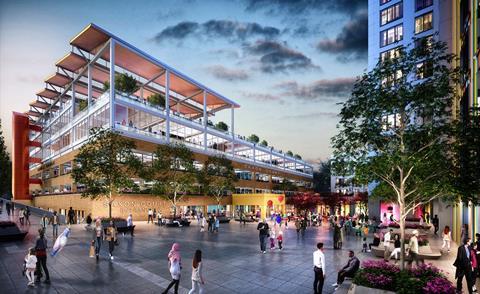 The scheme will go into local planners next year

Rogers Stirk Harbour & Partners has drawn up its first UK office scheme outside London with a £190m development in Milton Keynes.

The firm behind the Cheesegrater in the City of London has unveiled plans for mixed-use scheme in the city called MK Gateway.

The scheme for developer First Base and investor Patron Capital will include 185,000 sq ft of grade A workspace incorporating office, coworking and R&D space.

It will also feature 285 build-to-rent homes in a new building with retail and cafés at street level.

MK Gateway will be set around a new public square and landscaped green spaces and is designed to help the Milton Keynes hit a net-zero carbon target by 2030.

Plans will be submitted to the local council next year following a public consultation.

>> Rob Fiehn: It’s time to stop relying on the big names of architecture

RSHP has designed numerous offices in London and around the world, from Lloyds of London to 3 World Trade Centre in Manhattan and 8 Chifley in Sydney, but until now it has not built a purely office building in the UK outside of the capital. Richard Rogers’ regional projects such as Swindon’s 1967 Reliance Controls - as part of Team 4 - Gwent’s 1980s Inmos Microprocessor Factory and the more recent Macallan Distillery in Speyside fall properly into the industrial category rather than offices.