The architect Mark Fisher, best known for his work on stage designs for U2, the Rolling Stones, Pink Floyd and Robbie Williams, has died age 66.

He passed away peacefully in his sleep at the Marie Curie Hospice in Hampstead after a long and difficult illness.

Fisher was the founder of Stufish Entertainment Architects. As well as working on stage designs for music the firm was an executive producer in the opening and closing ceremonies of the 2012 Olympic and Paralympic Games and the royal opening of St Pancras International in London.

The Rolling Stones, who are appearing at Glastonbury this weekend, also issued a statement saying they feel “extremely saddened”.

“The remarkable sets he designed for us over the last two decades played a major part in the success of all of those tours. His passion, dedication and professionalism was infectious. We all loved his dry sense of humour and unflappable demeanour…a quietly soft spoken genius. Mark will be sorely missed - not only by us, but by every single member of ours..and any crew he worked with.”

Engineers Atelier One worked with Fisher for 20 years on many set designs from Pink Floyd’s Division Bell and Rolling Stones and U2 tours to the stage outside Buckingham Palace for last year’s Queen’s Jubilee concert.

Aran Chadwick, a partner at the firm, said Fisher’s friends and colleagues were devastated.

“It’s a big loss. He was a fantastic designer, an incredible talent and we’ll all miss him terribly,” he said.

“His draftmanship was incredible. His storyboarding and drawings were amazing and his technical knowledge was great, not leaving a huge amount for us to do as engineers. He had a very clear idea of how things worked.

“He also had a very dry sense of humour. Those projects happen incredibly quickly so a huge effort is needed by everyone on the team. He would orchestrate it all the way through and was an inspiring and unflappable leader.”

We are sad to announce that the stage designer and architect Mark Fisher, OBE, MVO, RDI, died yesterday in London aged 66.

He passed away peacefully in his sleep at the Marie Curie Hospice in Hampstead with his wife Cristina at his side, after a long and difficult illness, which he suffered with stoicism and courage and his customary good humor.

Mark’s work as a set designer and artistic director has transformed the landscape of rock concerts and large scale events over the last 25 years.

Together with his practice Stufish, Mark created the groundbreaking designs for all the Rolling Stones, Pink Floyd, and U2 tours for two decades as well as scores of other artists all over the world.

As well as his work in live music performance he also created designs for theatre productions and musical theatre including We Will Rock You, and Ka and Viva Elvis for Cirque du Soleil.

He was the senior designer for the Beijing Olympics Opening and Closing Ceremonies and was one of the three executive producers at the London 2012 Games ceremonies.

His work influenced not only the colleagues and crews with whom he worked but also surprised and delighted the many millions of people who experienced his designs all over the world. 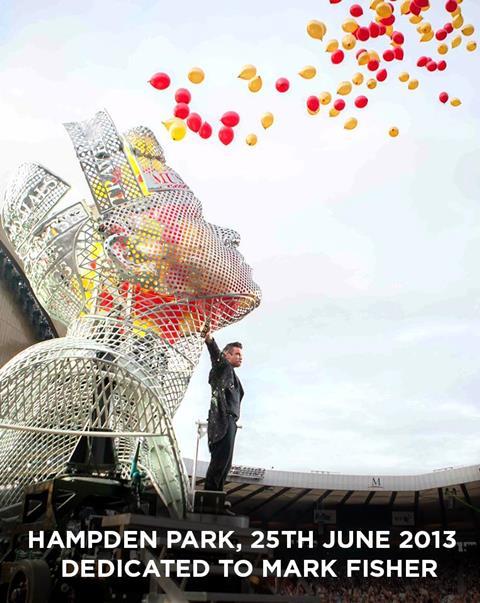 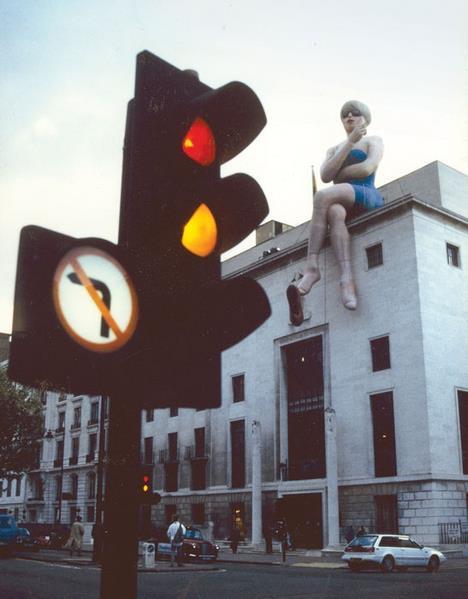 Having toured the world with the Rolling Stones, this 25m-high inflatable woman took up residence for one night only on the roof of 66 Portland Place.The girl on the roof — who would have stayed longer had the planners allowed it — went by the name of Angie and had been conceived by Mark Fisher as “the original honky tonk woman”. 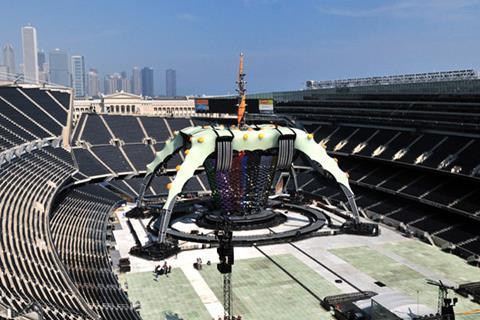 U2 World Tour 2009-2011: The 180 tonne portable superstructure spanned the full width of a typical football field, enclosing not only the performance stage and band, but also several thousand members of the audience. The superstructure provided support for almost 200 tonnes of technical equipment that was rigged over the stage. The superstructure was typically erected during a three day period preceding the show-day. 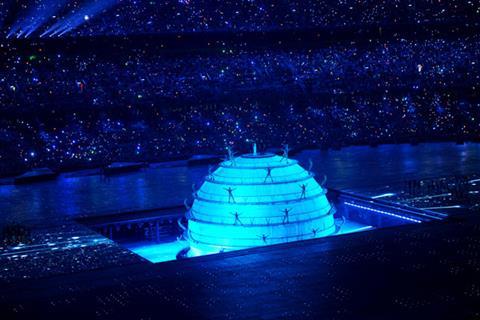 The Beijing Olympics 2008 Opening Ceremony, The Dream Sphere: The sphere was made up from nine latitudinal rings, with a performance position for a group of singers at the North Pole. The rings were structural trusses that functioned as running and rigging tracks for up to 60 performers who could run around them, always with their feet pointing inwards, towards the centre of the globe. The rigging was arranged to allow the performers to run, to leap, to turn summersaults and, at the lower latitudes, to fly around the sphere upside down. The rings were also designed so that they would pack down into a space only 5m high for storage in the lift chamber beneath the stadium. The sphere was lifted by a telescoping mast over 40m tall that placed the North Pole over 24m above the stadium floor. 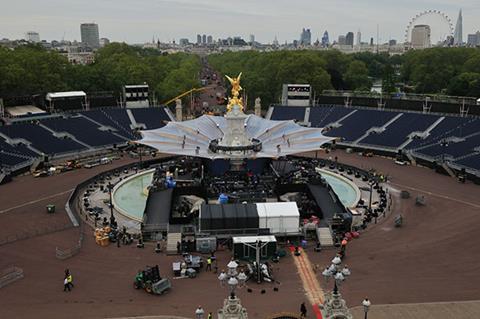 The Queen’s Diamond Jubilee Concert: The roof and stage were designed to create an ‘in the round’ stage that surrounded the Queen Victoria Memorial (QVM), while maintaining reasonably unobstructed views from The Mall to Buckingham Palace. The QVM is a Grade 1 listed monument, so the roof and stage structure had to be built and stabilised without any physical attachment to the monument itself. The roof covered an area of 1300m². The longest roof beams were 20m with a cantilever of 12m. The original plan was for the roof beams to be fabricated as glulam beams, but this proved too expensive. The final beams were fabricated as steel box trusses faced with 24mm birch ply. The transparent skins were from clear unsupported vinyl film with reinforcing webbing on the seams.