ITV wants to replace its 1970s built headquarters on the site of its famous South Bank studios in London with a 38-storey tower.

The broadcaster announced in February this year that it wanted to redevelop the site which would involve tearing down the 25-storey building, formerly owned by London Weekend Television and now called the London Television Centre, and replacing it with a new building.

The development will see all London staff working under one roof but will mean the closure of three historic studios.

In an environmental impact assessment scoping report sent in to Lambeth council, the firm said its replacement would be “a state of the art television, office, and studio accommodation incorporating a residential tower of up to 38 storeys”.

ITV told the council: “[The company] considers that there is a great need to invest in their currently outdated facilities…to ensure [it] can keep pace with the change in the way people work and to a setting that better represents the company and to provide a relaxing and stimulating work environment for its employees.” 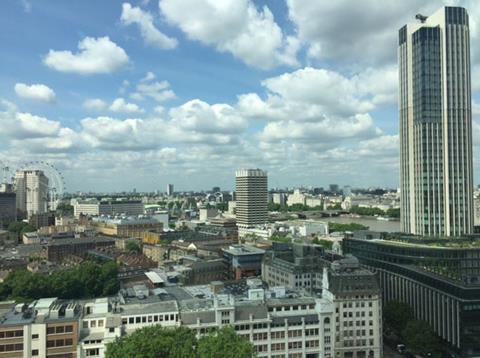 The current building (middle) was completed in 1972

It has hired planning specialist Taverner Consultancy to help with its feasibility studies and the broadcaster added: “The proposed development will provide an increase of non-residential floorspace, with primary use being office space with subsidiary uses, such as studio floor space reception areas, hospitality, galleries, dressing rooms, production studios, storage and front of house, as well as catering facilities.”

Alongside the proposed residential tower, the plans would see a main podium structure spanning across six storeys built, flanked by two further towers of nine and 14 storeys.

The residential tower could provide up to 270 apartments, documents submitted to the council outlined, plus internal parking for 60 cars, motorbikes and bicycles.

ITV said it would re-locate, temporarily, to other facilities while the building work was being undertaken.

The London Television Centre, between Waterloo and Blackfriars Bridges, was opened by London Weekend Television in 1972.