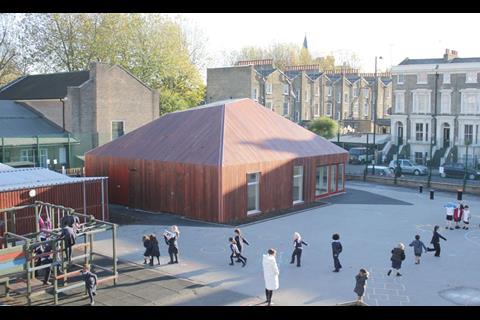 The building sits in the corner of the playground like a toy house, wrapped with cedar floorboards. 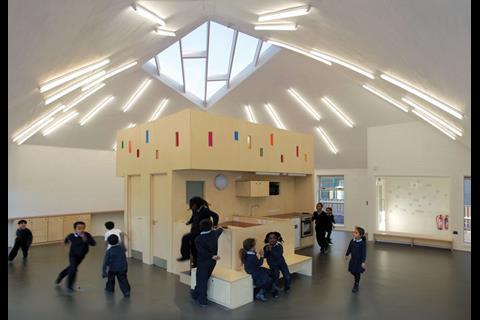 The plywood play tower provides a focal point in the room. 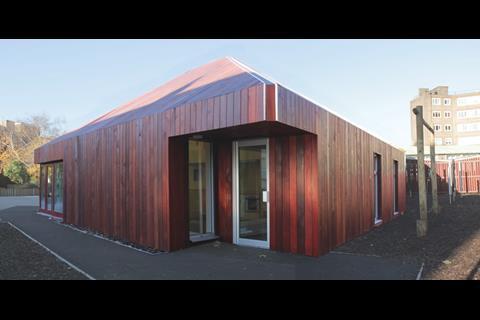 The corner entrances are recessed beneath the cantilevered roof. 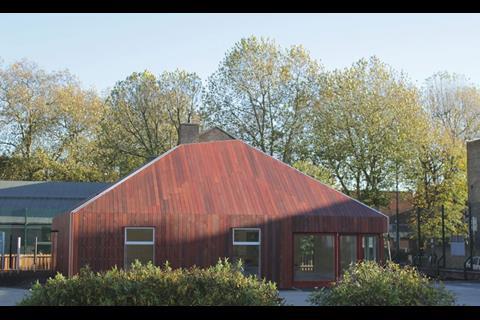 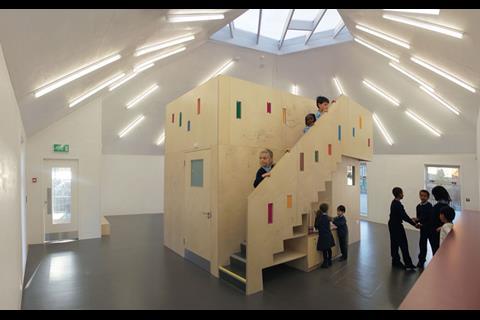 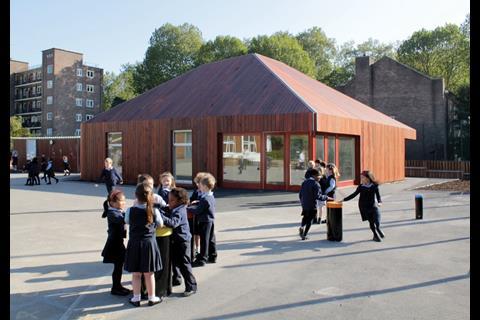 Walking across the playground of St Elizabeth Primary School in Bethnal Green, east London, you encounter a rather startling sight. Picked up in the low autumn sun, wisps of white smoke appear to be emerging from a diminutive stone chimney, poking out of the top of a squat timber house. Has Hogwarts’ Hagrid moved in as the school caretaker?

“It’s an optical illusion,” says Dominic Cullinan of Scabal, the architectural conjuror of this surreal vision. “But it was a complete accident.” For what you see is in fact the building behind, the gable end of a Victorian terrace, perfectly proportioned to cap the amputated top of the hipped timber roof in front. When seen from the right angle, it’s an intriguing spatial collage.

This is just one of the little details, accidental or not, that elevates this small building, a new space for the after school club, christened the School House.

“We wanted it to feel like being at home,” says Cullinan, “but in school.” The building thus takes the form of a childlike model house, a slightly skewed square in plan, with lopsided pitched roof, sliced off at an angle at the top. Two tall windows puncture the east and west elevations, allowing direct views through to the playground. So far, so house-like.

Yet, where you expect the front door, there is none. Instead, two corners of the building have been removed, leaving an expansive glazed opening to the south-western corner, which faces the playground, and a second opening to the south-east, facing the main entrance off the street. The playground-facing doors concertina open from the corner to provide a connection between inside and out, leaving the roof hanging above in an impressive cantilever.

The quirky form is completely clad in dark, stained cedar boards, which run up the walls and fold over on to the roof with seamless precision. From a distance, it looks as if the whole thing has been wrapped with floorboard-patterned vinyl, adding to the dolls’ house aesthetic.

“The school asked for a timber building, to match its curving entrance,” says Cullinan. “So we covered it with floorboards.” He is pragmatically matter-of-fact about the budgetary constraints of the project, which began as a £320,000 tender, but was miraculously completed for £250,000. Every part of the process has been an eloquent essay in that dreaded term “value engineering”, only, in this case, Scabal has brought real, tangible value with an absolute economy of means.

It began when they had to make space in the playground. A large bike shed had to be moved out of the way, but rather than waste precious budget on such things, the architects mobilised over 100 parents to do it. One afternoon, they all stood inside the structure and, on the count of three, moved it, inch by inch, out of the way. This is surely the heave-ho of the Big Society writ large, the stuff Cameron’s free school dreams are made of. But Cullinan winces at the suggestion.

The timber form sits directly on a woodchip ground, like a strange animal resting in its nest

And it is not hard to see why. For, in every move, this building is proof of exactly why architects – particularly such dedicated ones – are desperately needed in the process of school building, in making minimal budgets go such a long way. It is compelling physical evidence against the arguments of free school campaigner Toby Young.

Similar savings were made in the structure. It was originally going to be cross-laminated timber, but this proved too expensive. “It’s already £50,000,” says Cullinan, “if you just make it out of sticks” – which is precisely what he has done.

The timber frame of 9 x 2 inch studs sits on a low blockwork wall, tied together with a flitch beam at the eaves and ridge of the hips, the whole thing then sandwiched in structural plywood. The cedar cladding is supported by a slender aluminium trellis, hung from a continuous steel plate around the flitch beam. Pre-stressed aluminium flashing is exposed along the edge of the hips, framing a single strip of timber, a crisp detail that hints – along with the aluminium window frames – at an other, metallic, world within.

The timber form sits directly on a woodchip ground, like a strange animal resting in its nest, messy edging done away with by concealing a land drain beneath the surface. Stripped of excess skirting and curbs – the layered, chunky vernacular of most contemporary school design – it has the effortless simplicity of a garden shed.

Within, any comparisons with a shed quickly fall away, Tardis-like, the diminutive hut contains a soaring hall, the contrast made all the more sharp by the interior whiteness, which is accentuated by a shower of fluorescent lights cascading across the faceted ceiling. The space is lined with white-painted, shuttering-grade plywood, not only as a cost-saving measure, but also for its extra pronounced grain. “Screw your eyes up and it could be animal hide,” grins Cullinan.

In the centre of the room, a majestic tower rises up above a built-in kitchen unit and sideboard, with toilets concealed around the other side. Again constructed from plywood, with some vinyl laminated surfaces, this furniture-scale island unit provides a fun focal point rising up to the pitched apex, a topsy-turvy Tower of Babel for the kids to ascend and become kings of the castle.

Project architect Luisa Alpalhão has beautifully tattooed the whole thing with Ishigami-esque pencil drawings of dreamlike scenes – in the (probably vain) hope that pupils might be allowed to add to the mural.

“Wouldn’t it be great if schools were, in that way, for the use of children?” says Cullinan, who has himself spent much time agonising over the design of educational spaces, not only in Scabal, but as adviser to the Building Schools for the Future (BSF) programme.

BSF failed because, like so many initiatives that fell victim to the recent cuts, it had become bloated beyond all ability to be effective. Endless armies of handsomely paid consultants were drafted in to advise, yet the products were all too often compromised by being procurement-led by cumbersome, contractor-headed consortiums.

Scabal’s School House may not be the best business model – Cullinan admits it was essentially an enormous labour of love – but it points towards an alternative way of procuring buildings using local architects with an engagement in the place they are creating. Cullinan’s nephews and nieces attended St Elizabeth, and the practice even got involved in the school fête, organising pupils to build a scale model of the new building in advance of its arrival.

The resulting structure is a delightful distillation of the practical needs of the school, grounded in the place, and elevated by a playful architectural ambition to bring added value, far over and above the constraints of the budget and brief. If this is the future of school building, we have every reason to be optimistic.