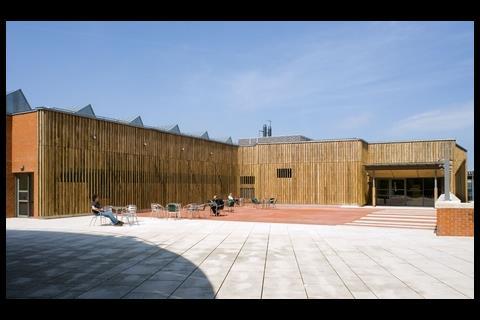 The terrace outside the first floor entrance. 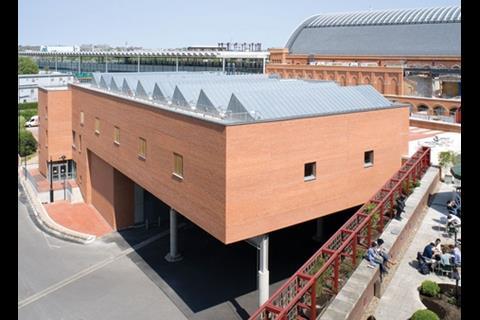 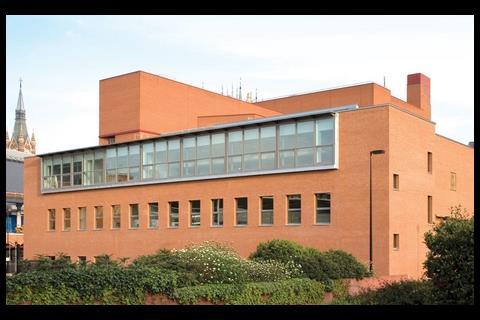 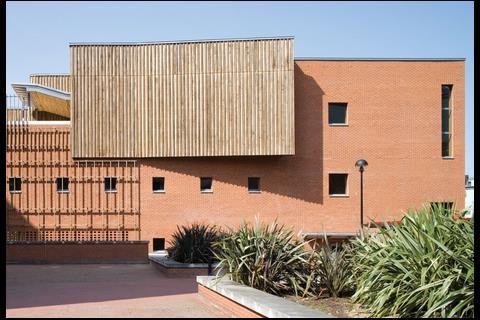 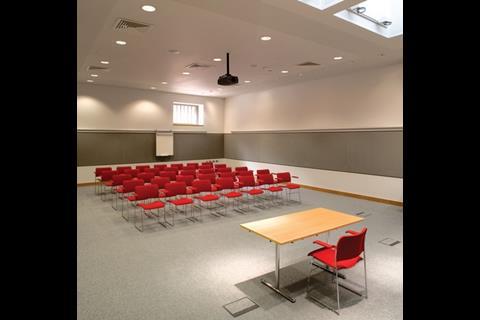 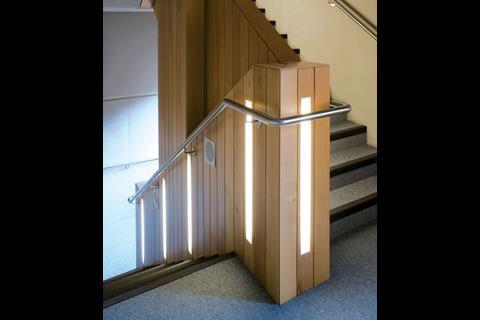 The high-quality detailing is well thought-out. 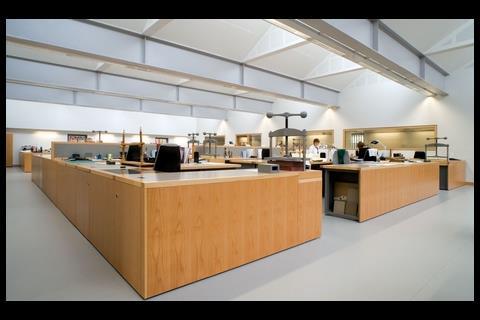 Long & Kentish Architects, working with Colin St John Wilson, has added the latest flourish to the latter’s British Library. And the Centre for Conservation is arguably an even better building. Pictures by Peter Durrant

From the Euston Road, through the British Library courtyard and into the library itself, then up and along and through — it’s all big, bold and rhetorical and full of people — then out the other side, onto a terrace, and in front of you a quiet square, and at the other end of it the strangely mute and humble, almost primitive, facade of the library’s new Centre for Conservation. The design, an extension to the late Colin St John Wilson’s British Library, is by Long & Kentish in association with Wilson.

The oak and red brick are vaguely reminiscent of Aalto, familiar ground for this architect. But here, I think, we aren’t moving back three generations so much as three millennia. Indeed, the architect refers to this little square as the acropolis.

The conservation centre sits like one of those fiercely guarded primitive huts such as the Temple of Vesta — to switch civilisations for a moment — that stood for centuries in the Forum in Rome, its wooden columns and thatched roof surrounded by the later magnificence of marble monuments.

The building is a testament to the belief that technical innovation is separable from architecture — or rather that it need not respond to it in any way other than by letting out the trousers and adjusting the jacket. This sits well with the nature of the conservation work that goes on inside. Most book restoration is done using centuries-old techniques: flour and water paste, linen thread, beeswax and leather.

But in terms of analysis and peripheral work, things are right up to date, with spectrometers and CNC flatbed machines that can cut and label three conservation boxes in less than five minutes.

In the sound archive, which the building also incorporates, they use any and every means available to conserve and restore an amazing variety of audio material. The sound studios on the ground floor float on rubber pads to isolate them from the rumble of trains, passing at intervals of about one minute. The old premises in Micawber Street had such loud air conditioning plant that it had to be switched off during recording sessions, which were thus limited in length by how long people could endure the rising temperature.

The client saw the building as a way to bring together staff from several London locations in a space that would allow them to maintain the most up-to-date equipment and techniques.

A further function is to act as an information centre for the public, and as a training centre for the highly specialised skills which need to attract more hands to an apparently dwindling workforce.

The client — and library people tend to be methodical to a fault — took the opportunity to address many organisational issues of identity and operation, all of which fed into the brief.

The main architectural move was making the little square, which is in fact a bridge that solves the mundane problem of spanning the vast two-storey loading bay. This gives one full storey on top, where the light is, and two half storeys below, with the two-storey plant room forming one wall of the loading bay, and directly accessible from it.

On the top — that is, at the entrance level — is the conservation studio, together with a public education area and a small lecture and training room. The two lower levels house the sound archive and the specialist book conservation rooms — acids, gases, quarantine rooms, storage rooms, workshops and the like.

The book conservators, who are in the majority, get the best light and the grandest room — a column-free space 15m by 40m, with a concrete roof giving north light. Here we are back with the “primitive” theme. The roof is made to look not like zippo-cad-engineered wizardry, but like bloody great steel beams holding up a bloody great concrete sawtooth roof — the beams are 800mm deep and 300mm wide.

In fact it is technically quite sophisticated. Arup achieved a Breeam “excellent” rating for the building as a whole, but all that refinement is hidden under the most basic of clothing. Arup has done a skilful job servicing this room, with air delivered through the specially designed work desks and drawn out through high-level wall grilles. The roof remains a clutter-free essay in heavy engineering.

And did I mention that the building is bomb-proof? Those humble-looking walls hide a blast-proof steel substructure, including massive window frames.

This room is like a temple: in library silence and with concentrated application, these vestals — to stretch a definition — will year after year, and with their hands and simple tools, work to keep civilisation alive.

The detailing throughout is simple but well thought-out. The conservators’ benches, of which over 50 were required, are large and technically exacting. They went through extensive prototyping and live testing before the client was happy to take the design to production.

Equally, the sound studios were tailored to the specific needs of the archival work done there.

Finishes are of high quality from a simple palette: oak, brick and zinc are used outside, while the inside uses painted plaster and beech joinery. Concrete that cases steelwork is exposed where possible internally. You come across beautifully finished columns and piers, and the effect is subtle — would you expect anything else in this building? — if only the occupants could be dissuaded from sticking Ryman pinboads onto them. But it’s their building, and I strongly suspect they will be very happy with it.

This is a building waiting for a context. You look out the windows at Portakabins and skips, construction sites and car parks. It hasn’t feared the worst and turned in on itself, but begins to suggest strategies that future developments might adopt.

Towards Midland Road, with the new St Pancras Station, there is an obvious connection to be made: a new staircase down from the “square” to road level.

Does it work, the simple shell burying all the modern stuff? Cedric Price once described a Leslie Martin and Sandy Wilson student residence in Cambridge as “just the 14th century with power points”. It was a cruel remark, though not wholly unjustified, and yet I think here things have changed.

It is a better building than the main library. For one thing, the fussiness of the raked pointing on the older building is gone. Here it is flush pointing with a gritty lime mortar. Plain zinc replaces the powder-coated metal in that peculiarly unpleasant shade of red. And we have the addition of rough-dressed oak.

It may be argued that the conservation centre is a small building, and that not nearly as much is being asked of it. For one thing it doesn’t have the rhetorical role to play. But in another way it seems to be asking to be seen as more important, to be taken more seriously — to be accepted as both the source and the preserver of a set of values that sit at the core of civilisation, this primitive hut, high on its acropolis, surrounded by wealth and luxury, guarding the ignis perpetuus and standing as a marker of where it all began: earth and timber.

Whether our society buys into that view remains to be seen. It is, as they say, a big ask.