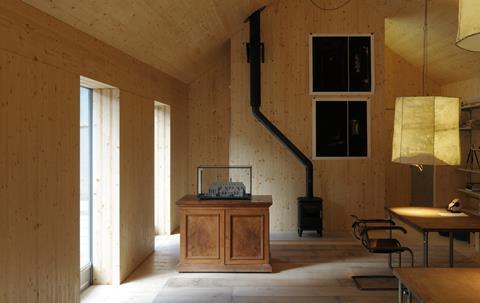 Over the past decade, the once run-down Shatwell Farm in Somerset has enjoyed a remarkable revival of fortune.

In 2008 Skene Catling de la Peña completed the refurbishment and expansion of a disused dairy to create a home for its owner and two years ago Stephen Taylor added a cowshed distinguished by a monumental concrete portico.

A second barn by Taylor — again sporting a portico, this time in brick — is soon to address the cowshed across the valley that extends away from the farmyard.

The imagery of these new buildings supports the owner’s vision of Shatwell’s remodelling as an act of quasi-urbanisation. This remains a working farm but his ambition is to introduce new uses and greater density. What are currently ill-defined dirt tracks should, in time, suggest a reading as nascent streets.

The latest addition houses an office and a store for the owner’s architectural and family archive. The work of Hugh Strange Architects, it is effectively a new building nestled behind the now consolidated remains of a dilapidated 19th century store that faces the farmyard.

A more conventional refurbishment was considered but the structure’s long, narrow plan prohibited its adaptation to anything but its original use. The decision was therefore taken to clear the most heavily damaged fabric — the roof and rear wall — allowing for the introduction of a new structure of more generous dimensions.

Set back from the retained wall and rising above it, this paraphrases the original building’s form. Its most prominent feature, as seen from the farmyard, is a fibrous cement roof that extends for the building’s full length, its ridge and eaves dropping from end to end in parallel with the gentle fall of the ground. This gesture maintains the impression of a unified form but the fabric supporting the roof actually comprises two independent enclosures framing a covered entrance yard between them. 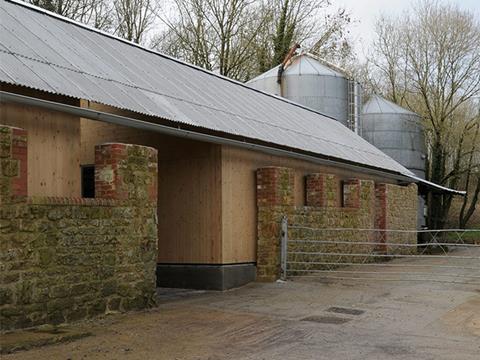 A central opening in the masonry wall provides access to the covered entrance yard.

As with Hugh Strange’s debut project, a house for himself and his family in south London, these have been constructed in cross-laminated spruce. The significant innovation here, however, is in the use of the material in monolithic form: a choice informed by the massive fabric’s capacity to stabilise the building’s temperature and moisture balance and so better conserve the material on paper stored within it.

The wall panels are 300mm thick and those that form the double-pitched roof a still chunkier 420mm, providing U-values of 0.35 and 0.25 respectively without recourse to insulation. The fibrous cement represents the only external lining, a ventilated void between it and the timber panels serving to reduce the risk of overheating in summer. It also oversails on all sides, providing a measure of protection to the walls. These have had a preservative applied to them but only in the interests of maintaining a colour match between the internal and external faces.

Identical in volume, the two timber structures each house a single room that extends to the roof — one the office, the other the archive — with small ancillary spaces sited at the far ends of the plan. These stand like Monopoly houses on insitu concrete plinths, the office 400mm higher than the archive. The entrance yard’s location coincides with an opening in the masonry that was made in the last century: a gap wide enough for a van to pass through, now allowing deliveries to be made undercover.

Extending the range of cement-based products at play, the ground is finished in a distinctive precast concrete plank that was developed for pig-farming and incorporates gaps designed to keep the animals’ feet free of dung. Here, they have been filled with a fine gravel and a membrane introduced below to prevent plants growing.

This treatment is also carried through to a terrace cut, by means of an insitu-concrete retaining wall, into steeply rising ground on the building’s far side. Extending the full length of the site, this terminates at one end in a full-width flight of insitu steps, providing access to the hill. The view in the opposite direction is closed by one of a pair of galvanised steel grain silos. Now redundant, these cylindrical volumes are set to be converted to further storage space: a scheme for which Strange’s practice recently secured planning permission. 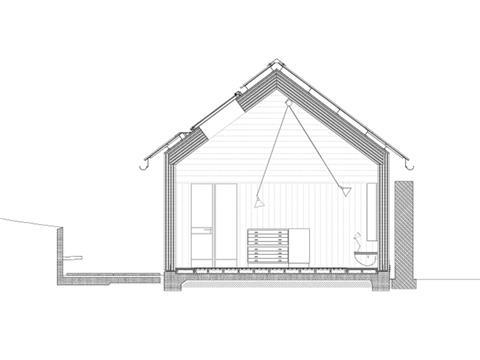 Although it faces away from the farmyard, the hill-facing aspect has a strong case to be considered the primary facade. Both rooms take daylight from this side, presenting to the farmyard only blank timber surfaces through the now unfenestrated masonry wall. The attraction of the north-west light was one motivation behind that choice but so too was a desire for visual separation between farmyard and interior. The hard edit between a world populated by manure-besmirched tractors and the altogether more rarefied environment provided by Strange’s building is one of the project’s principal pleasures.

Despite their essentially common form and material, the two interiors present distinct characters. This is largely a product of the different ways that light has been introduced. The office presents a run of regularly distributed French doors to the terrace cut into the hill. As with all openings, these have been framed in galvanised steel and fixed to the outer face of the wall, thus maintain a reading of the full thickness of the timber. 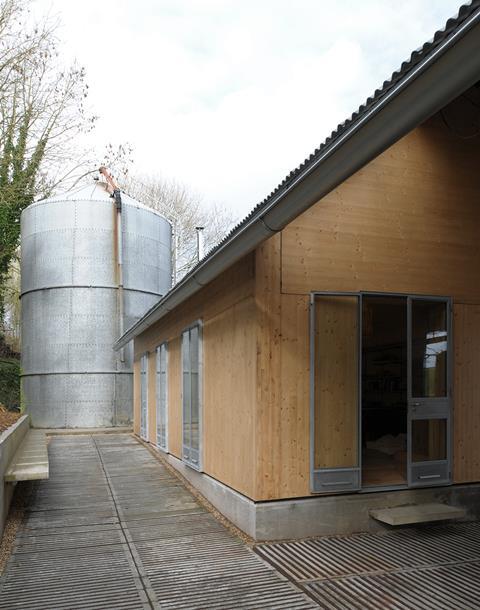 The archive is essentially an inward-focused space: a splendidly appointed scout hut

The archive, by contrast, has been provided with only one small window at eye-level, the larger part of its illumination coming from a bank of skylights on the hill-facing roof. Through these openings we glimpse the upper branches of trees growing up the slope but this is essentially an inward-focused space: a splendidly appointed scout hut.

Both rooms have been equipped with underfloor heating, powered by an airsource heat pump, with wood-burning stoves providing supplementary heat on particularly cold days. The floors themselves are edged in cross-laminated spruce but incorporate carpet-like inlays of other timbers sourced from the surrounding woodland. 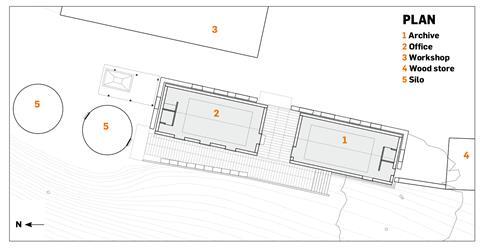 In the office, a pungent expanse of rough-sawn cedar has been introduced while sanded and oiled ash bordered in beech cultivates a more luxurious character in the archive. This surface forms the stage for the two monumental oak cabinets — originally designed by Charles Holden for his national Archive of Wales. For prolonged study, a bespoke display system has been installed on the long, windowless wall to the farmyard that best benefits from the provision of toplight.

Designed by the architect in collaboration with upholsterer Jude Dennis and joiner Lars Wagner, it comprises a series of large hinged plywood panels that open to reveal a surface of packing fabric. In a manner characteristic of the project as a whole, these workaday materials have been elevated through the attention paid to their assembly. 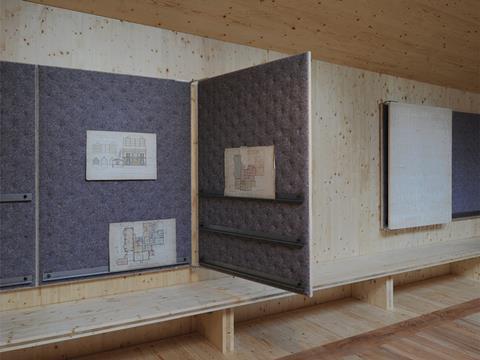 The fabric has been hand-stitched to the plywood, the loose threads emerging on its rear face through a constellation of drilled holes. On first sight, one could mistake the results for a postminimalist sculpture in the manner of Eva Hesse.

This concern with articulating the means and sequence of assembly is one of the project’s guiding themes. Each building activity — the laying of the original masonry wall, the casting of the plinths, the installation of the cross-laminated timber and the application of the various lightweight components — retains an expression as an independent layer. As in Strange’s own house, the sequence is characterised by a clearly demarcated development from wet trades to dry.

The selection of materials draws on those of the neighbouring agricultural sheds but in its precisely conceived construction the building evokes more archetypal sources too. In the adoption of an explicitly separated groundwork, wall and roof, we can read a Semperian concern for the articulation of primary building operations — a primitive classicism not so far removed from that at play in Stephen Taylor’s nearby work.

Among the accumulation of successive activities that have formed the site, the building’s inhabitation suggests itself as a final layer. Classic 20th century furniture predominates, with vast hanging lamps made of pigskin making a particularly impactful appearance in the office. Everything speaks of a singular taste and a rather fruitier one than might be gleaned from the encompassing building: a disjunction that imbues the scene with an entertainingly stage set-like atmosphere.

The intention now is to monitor the building’s environmental performance over the coming year, making regular measurements of the internal temperature and humidity in relation to variations in the external conditions. The fabric satisfies the building regulation’s expectations of the performance of structures employed for work use on the basis of a static U-value calculation. However, Eurban — the company that manufactures the cross-laminated timber — is confident that the cross-laminated spruce’s capacity for heat retention will ensure a much better performance than this blunt means of assessment can prove. By establishing the dynamic U-value that has been achieved, the monitoring process should offer evidence that will allow this innovative method of construction much wider application. 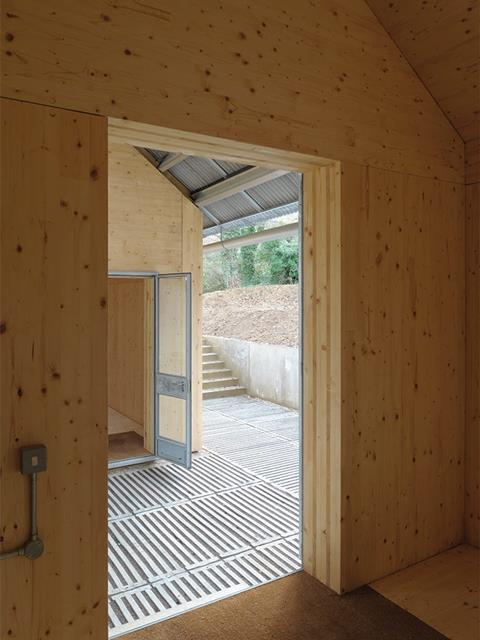 Doors are face fixed to the outer face of the wall to maintain a reading of the timber’s thickness.