Now 86, Denise Scott Brown revisits her early photography, the genesis of the ideas that immortalised her as one of the most influential architects of the 20th century. She talks to the curator of a new exhibition 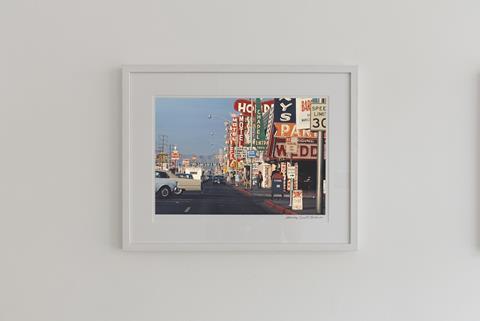 Scott Brown says: “That’s one of my very favorite photographs from Las Vegas and it’s one of the first I took. The very permanent mountains are visible in back, and there is a blue Mediterranean sky that’s neither in Athens nor in Las Vegas. I look at this and think, do you love it or do you hate it? Then I’m reminded that Greek architecture, although I love the Pentelic marble, was brightly painted. So the picture recalls brightly painted, primary-colored Greek temples and their columns. Look at the business of this. I’m sure if you’re looking for a motel you’ll find one in there — you won’t be mistaken and turn into a gas station. The road signs are really small but they’re repeated shapes. They’re square, intense, with strong white arrows. You sure as hell know some are road signs and others are inviting you in. So you understand this environment, even if people think you won’t. For me, it’s a photograph that pulls everything together. Do I hate it or do I love it? I just shoot it.”

Back in the 1950s and ’60s, Denise Scott Brown used photography to explore and express ideas about architecture, beyond the documentation of building forms.

Photography proved to be an essential tool for analysis that enabled Denise to develop ideas that have been more influential in her architecture than any single building.

Her careful observation of space through photography would later be instrumental for the development of her theory and practice. It was also the means by which she discovered and exposed what she believed in: popular culture and the vernacular representation of information in architecture.

Throughout her career, Denise took many photographs, and for purposes that changed over time: research, teaching, planning, activism, and architecture. Half a century after Las Vegas, photography has established itself as a sub-discipline of architecture — a development that she can be at least partially credited with. 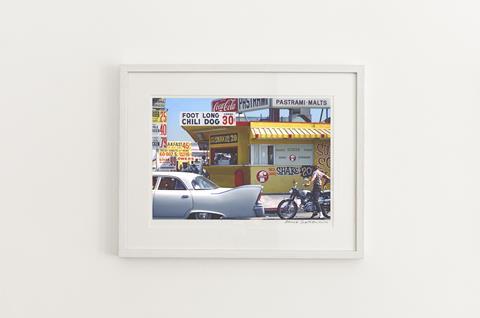 Scott Brown says: “I was getting to know my surroundings in Santa Monica, where I was living up in Ocean Park. I’d get going with my camera and just walk. Eventually you approach the main part of Santa Monica and Pico Boulevard is on this edge. It’s a long street that goes all the way into Los Angeles, a kind of everyday strip serving this village of Santa Monica. This photograph is about viewing the everyday landscape. We had later, in Learning from Las Vegas, many different ideas about how you map what you see. At this point, I was building up my data by photographing what I loved. I’d read The Image of the City and The View From the Road and all of those things about seeing, and I’d already written my article called ‘Meaningful City.’ What they all discuss is how you actually see. What I’m interested in — and I was made this way partly by Dave Crane — is what you perceive and understand from what you see. If you study Camillo Sitte and apply it to the Strip, it’s the same principle. You see things from afar and they guide you. Los Angeles freeways will sometimes have a line for a mile and at the end will be a billboard, which is like Sitte — like his church tower — pulling you to it to tell you something. Billboards are contraptions made for a purpose, and the purpose is to be readable. They’re set on steel supports and shaped so you see them differently from each side and you can see the supports inside. If you think of it not as oppression or persuasion, a billboard is as much a contraption as a camera.”

In a time of digital media and information surplus, Denise’s legendary photographs offer an enduring template for inquiry, discourse and design. They are evidence that communication is, and will always be, an essential function of architecture.

But, for Denise, photography is only one of many conduits for practice. As a passionate writer, Denise has used her words to speak her mind and raise awareness about critical issues in various professional circles. This spectrum includes books, lectures and speeches, research manuscripts and planning guidelines, exhibitions and her much celebrated cartoon drawings of buildings with speech bubbles. 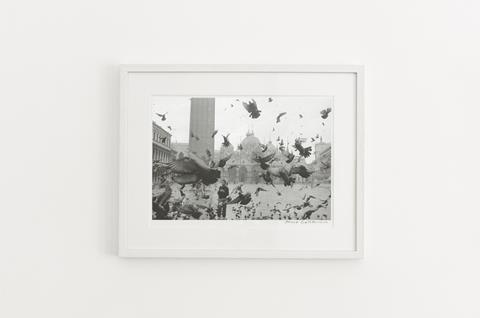 Scott Brown says: “Robert [Venturi] and his father had a hobby of doing photography together, with an old Leica. Robert had the skill to develop black and white photographs. When we went to Venice for CIAM Summer School we fell in with another American architect, Lou Sauer, and his wife Liz. We were all in love with the pigeons and we have a postcard that says Coca Cola in pigeons. We used to go to Piazza San Marco with the elder architects from the conference, people like Franco Albini and Ignazio Gardella. Gardella could stand there, suddenly swoop down, pick up a pigeon and launch it. That’s a real Venetian skill. I observed the pigeons with their wings out and thought they were marvelous. I had the idea of photographing them. In Piazza San Marco we got in the middle of those pigeons and photographed them. We had very fast film; you actually see their wings curling round. You could see a pigeon as a Perret Bridge, with its wings out, like an engineering structure. Then we accidentally inverted the image, getting the negative turned around as the positive slide was made.”

There is no doubt that Learning from Las Vegas, which Denise co-authored, is among the most defining texts of postmodernism. The publication made a seminal statement in architectural theory, thrusting the discipline into a broader cultural discussion that is still taking place in universities around the world. Some 45 years after it was originally published, the visual manifesto has been translated into 18 languages and is still in print.

Communication in architecture raises awareness of critical problems and promotes innovative solutions, resulting in better buildings. Today, a growing number of architectural thinkers contribute to the field without having to lay down a single brick. 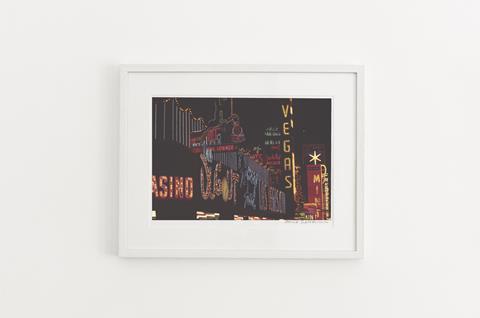 Scott Brown says: “That’s Fremont Street. I like the geometry of that shot and the golden mean of it. I love these combined patterns – like an urban land use map – the movement of that train, the movement of the lights. This here with its bright pink — I’m a sucker for pink anyway. So you put it all together. But this is not what I really should be taking because it’s the old fashioned strip downtown, not The Strip out in vast space.”

Curators, critics, historians and writers revel in the contemporary understanding that architecture is not limited to buildings per se, and venture into new territory in order to reveal new concepts.

Beyond offering biographical insight, these photographs also illustrate Denise’s intuitive curiosity for a spatial practice, which is primarily based on ideas rather than forms.

Photography is, in this case, the lens she uses to understand her environment and the culture it produces. Here, Denise describes each of the photographs, recalling anecdotes and some of the fundamental principles that she would later develop throughout her career. Their relevance and timelessness is remarkable. 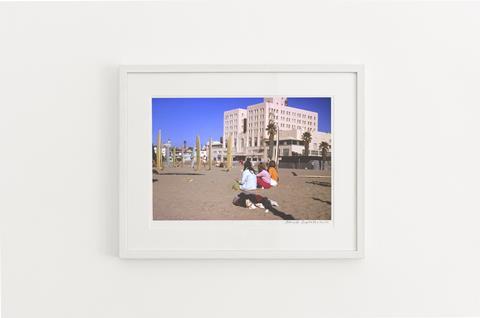 Scott Brown says: “When you exited my cottage, you turned right and got to the Pacific Ocean. I would do my supermarket shopping by walking along the beach barefoot. It was really very nice, this teeny little cottage. As I walked along toward Santa Monica Pier, I went by Muscle Beach and on Sundays families would go there. I was intrigued by these people throwing balls in the air, sometimes fathers with little babies, doing acrobatics together. These are my totems, surfboards and sérci of the gondola facing that way and this way. I loved the blue and the beach and these totems, and then the people make a very good foil. Look at their positions and the way they’re focusing, and someone’s possessions completing the composition.” Again, it’s forms that have meaning, and what are these forms, what do the forms of surfboards mean? They’ve been made as if they are totem poles. And the palm trees look like totem poles too.” 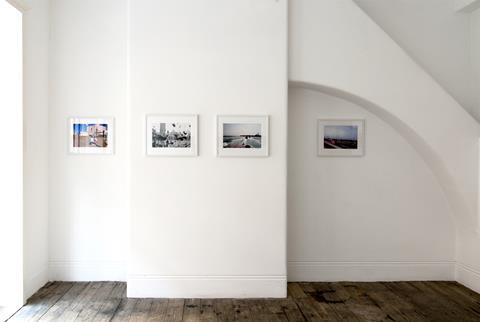