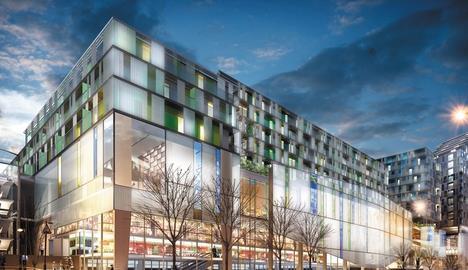 London mayor Ken Livingstone has given the green light to a £150 million mixed-use scheme in Colindale, north London, designed by Sheppard Robson.

The development, in Edgware Road, was backed by Cabe, but came under fire from the Commission for Racial Equality (CRE) because it involves demolishing the Oriental City food hall and supermarket — a focal point for London’s Chinese community.

Although Livingstone expressed doubts about the project, he claimed last week to have no option but to approve it as his planning powers do not allow him to refuse it directly, or to relocate it.

The project will include leisure facilities and a school, alongside 30,000sq m of retail and 50,000sq m of terraced housing. The three main buildings will have two floors of retail outlets, plus parking. Pedestrians will reach the shops via travellators visible from the street.

Space would be made available for Oriental City, but its existing building would be demolished and it would have to move elsewhere for three years.

The CRE had accused Brent council of failing to carry out a full race relations impact assessment before granting planning consent.