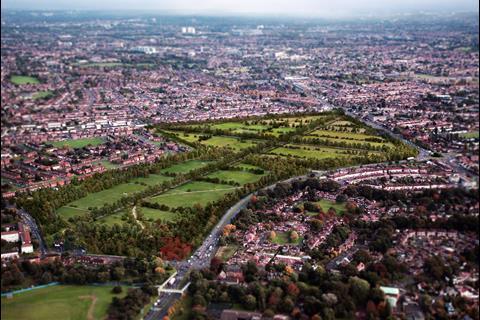 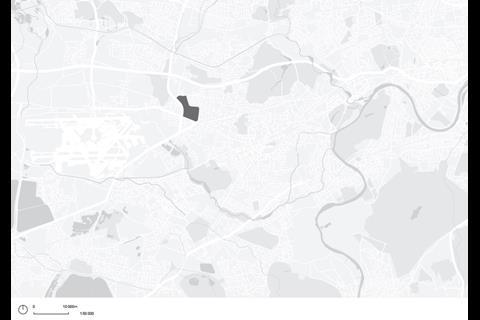 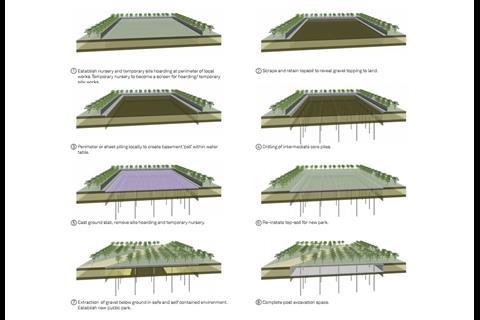 44 ha of disused farmland near Heathrow will become recreational space

Carmody Groarke has been appointed to oversee the masterplan and urban design of a new public park, which is being created on disused farmland near Heathrow Airport.

Rectory Farm, a 44 ha site in the London Borough of Hounslow, will be transformed into a new recreational area for the local community, with ‘urban green corridors’ to connect neighbourhoods.

Landscape architects VOGT, engineers Arup and planning consultants DP9 have also been picked for the scheme by the site’s owner, Formal Investments.

The park forms part of a masterplan for the Green Belt site, developed by Carmody Groarke, which will be delivered over the next decade. It includes extraction of approximately three million tonnes of minerals from beneath the park’s surface, across an area of 320,000 sq m, using a ‘top down’ construction methodology which contains the mining process below ground (see diagram).

Following the mineral extraction, a concrete basement structure will be constructed to create 180,000 sq m of lettable underground warehouse space, which is intended to provide a funding stream for the park.

Formal Investments has owned Rectory Farm since 2003 and has been working on the planning application since 2009. It was historically used as Grade 2 agricultural land, but had not been farmed since 1996, “due to antisocial behaviour, vandalism and concerns over food safety”, according to Carmody Groarke. There is currently no public access.

“This development will transform Rectory Farm into a public amenity and a valuable recreational asset for the local residents,” said Kevin Carmody, co-founder of Carmody Groarke. “The undulating and botanically diverse landscape of the new park will be accessible to the public, immediately linking neighbouring communities, while providing safe routes to school or work.

“The grading of the park topography will also provide significant acoustic attenuation from road and aircraft noise to the open spaces and surrounding housing.

“As our global cities become increasingly urbanised, pressure on sourcing and distributing resources will undoubtably grow accordingly. At the same time, architects and designers, investors and politicians, have the duty to meet these huge challenges with localised strategies, to positively improve places that directly affect people’s lives.”