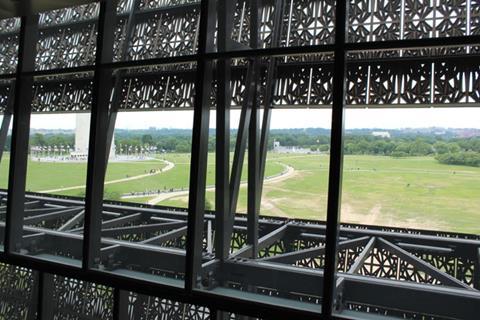 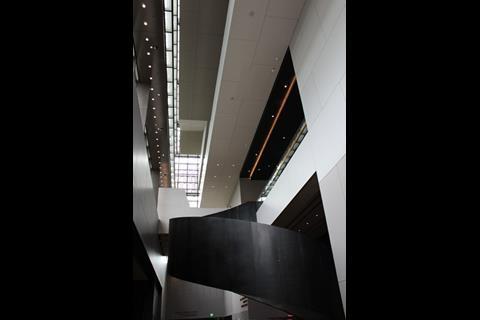 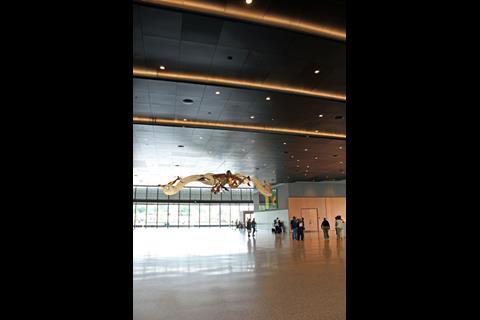 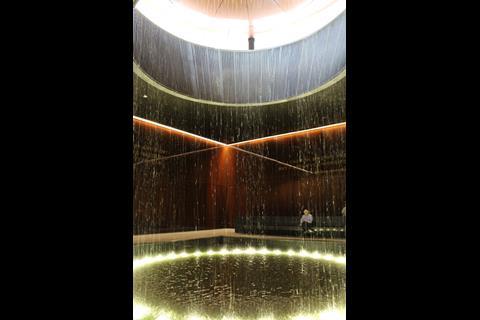 On a recent trip to Washington DC I had the opportunity to visit Freelon Adjaye Bond/SmithGroup’s National Museum of African American History and Culture. I had intended to go on a quick tour to observe the architecture – but this building doesn’t allow for a purely superficial reading.

The museum stands in an imposing position on the Mall, opposite the Washington Monument, wrapped in a filigree metal mesh inspired by ironwork made by slaves. Inside a vast entry space, black volumes tidy the clutter of lifts and doors to the inevitable events spaces into neat, bronze-clad recesses. A bank of elevators takes you up to the culture galleries but we were directed down a beautifully curving staircase to the entrance to the history galleries.

Here a glass-sided lift shuttles groups of about 30 “back in time” to the beginning of the history galleries. Dates painted on the lift shaft tick backwards to 1400. Emerging into the galleries you are ejected into a low, dark and confined space – which at current visitor levels is also crowded – that exhibits some of the most appalling truths of our shared pasts (Britain was responsible for 40% of the transatlantic slave trade). The architecture here fades into the background, allowing the exhibits to take precedence, educating about one of the more toxic and evil periods of human history.

Walking through these galleries is not a pleasant experience – it is an uncomfortable place to be white. It is, however, profoundly moving. The exhibits on the transatlantic slave trade and Revolutionary War then emerge in 1776 with the Declaration of Independence – celebrated architecturally in a releasing emergence into a triple-height space which then charts the constitution and its various amendments alongside significant African American figures of the time and a 1:1 scale slave hut.

Ramps then lead upwards through time into subsequent galleries exhibiting the domestic slave trade, the civil war, Jim Crow (segregation) laws and the Civil Rights movement, leading ever upwards until the triumphant final case showcasing America’s first African American president. There is no suggestion that this will be the final chapter in the history of black Americans, though, with references to the recent protests of the Black Lives Matter movement.

Coming out of the history galleries the architecture begins to reassert its dominance over your consciousness. The flat blackness of the galleries that so effectively echoed the exhibition in their spatial cues give way to a stone wall that leads into a contemplation court. Here water falls in a lit ring from a skylight into a pool below. Quotes from civil rights leaders are the only decoration to the wall and stone benches give a welcome spot to decompress from the heaviness of the history galleries’ content. We had been there three and a half hours, walking the three miles of history galleries and were feeling more than a little shell shocked by the experience.

Ascending again you can visit the culture galleries – something we ran out of time for – which are accessed from a glazed corridor that allows you to peer through the filigree mesh of the facade and out across Washington DC. A slot has been cut at one point that allows panoramic views towards the Washington Monument and The Mall, underlining the building’s prominence in the city.

Sadly, this standing has catalysed displays of repulsive racism. One of the friends I was with, a DC local, told me that nooses had been hung outside the museum recently. However, while this is a hideous consequence of the way architecture can provide a rallying point I wholeheartedly support the way the museum inspires discussion. As British blogger Reni Eddo-Lodge recently commented in the Guardian: “Not seeing race does little to dismantle racist structures or improve the lives of people of colour…  We must see who benefits from their race, who is affected by negative stereotyping of theirs, and on whom power and privilege is bestowed – not just because of their race, but also their class and gender. Seeing race is essential to changing the system.”

I walked away from the building – one I had primarily visited to observe architecturally – deep in discussion with my friends about race and division in our respective societies. Freelon Adjaye Bond/SmithGroup has handled a profoundly difficult building with great skill. If I am speaking as much of the effect of the exhibits as I am of the architecture I would say that this is testament to their ability to frame a narrative and then stand back and let that narrative speak – as all really great architecture should.